An assortment of interesting stop off points along our walks.

A selection of campsites and glamorous camping locations.

Remember to prepare properly before heading out on any type of walk or outdoor activity. Tell people where you are going and what time you are expected back. As Wainwright says “There’s no such thing as bad weather, only unsuitable clothing”. 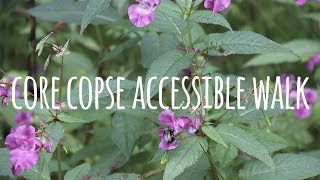 Walk Details
East Hill Strips is an historic and iconic hillside that dominates East Devon with the market towns of Honiton, Ottery St Mary and Sidbury in its shadow. It is a long, narrow ridge forming the watershed between the Sid Vale and the Otter Valley.

The hill has a long history of occupation with evidence of activity as far back as prehistoric periods, in the form of burial mounds and an excellent example of a round barrow not far from Core Copse.

Today, the hill is under forestry plantation and ancient replanted broadleaf woodland, boasting some of the finest displays of bluebells in the area in Spring. Much of the plantation was in place by the mid-20th century and today Forestry England work closely with adjoining landowners to harvest sustainably grown timber whilst allowing free access to everyone.

This walk begins at the entrance to Forestry England’s Core Copse Forest, where there is ample of road parking. The route runs through the gate and onto the well-defined path. During your walk you will be greeted with hard standing, accessible tracks for most of the route. Some areas can get boggy in winter with small sections of the track proving more challenging than others.

Surrounded by a variety of conifer and mixed deciduous woodland you can expect to see some of Britain’s most iconic trees such as Beech, Oak, Hazel and Sweet chestnut mixed with a variety of productive timber crops such as Douglas fir, Grand fir and Japanese larch (particularly stunning in the autumn months!).

Deer roam freely through the site and, for wildflower enthusiasts, there are spectacular displays of colour along the rides and tracks at Core Copse in the summer months supporting many butterfly species including fritillaries and skippers. Look out for bluebells, agrimony, fleabane and vetch growing wild on-site.

If you’re very lucky you might catch the sound of the resident bird of prey, not to mention many varieties of other bird life including cross bills, robin and nightjar. It’s a great place to take your dog for a walk and there is a dog bin on-site for our four-legged friends.

Deb’s Verdict
For this walk, I used the DaVinci wheelchair with TrailRider attachment, which was ideal for this terrain. The track is good but I can imagine that in places it could get a little muddy after heavy rain which might prove a little tricky for a manual wheelchair!

The woodland was very soothing and relaxing. We went for a late afternoon walk and there was no one else around. It was great to explore the nature but also very uplifting to stop and listen to the wildlife that could not be seen but could be heard.

There are no facilities at Core Copse – it’s not a tourist attraction. There are no shops, nor cafes or visitor centre – it’s just a beautiful and peaceful walk which is so beneficial for mindfulness. It is a perfect multi-sensory walk

The Healthy Back Bag
View details