The iCandy recipe for innovation – British craftsmanship and no limits. One of the key differences with an iCandy product is the use of aeronautical technology.

The standard of engineering and luxurious level of material rival that of a plane, not a pushchair. The results are seen and felt in effortless performance.

The fluidity of movement and smooth handling from the first touch are the result of master engineering. We’ve made the ride for baby seamless, safe and deliriously comfortable, and the experience for you a pure pleasure. Just as important as the design is the look – the look of luxury, modernity and style. 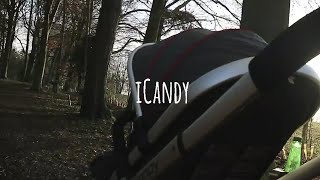 iCandy and The Outdoor Guide

“The twins loved being pushed around Peppa Pig World by their idol Peppa in their iCandy buggy!”

The luxury pushchair Brand, iCandy World, are excited to announce that a donation of the money raised by two of the company’s most popular existing products will now go towards Great Ormond Street Hospital Children’s Charity.

The two iCandy products which will contribute money alongside the brand’s fundraising endeavours, will be the company’s iconic Peach Pushchair, and their adorable toy pram, the iCandy MiPeach.

The product promotions will complement the brand’s bold ambition of raising £100,000 towards the development of a brand new enclosed isolation recovery bay at the Hospital.

The two product styles were selected due to their popularity with customers, the award-winning Peach is famous for being the world’s first multi-configuration single to double pushchair, whilst still attaining a single footprint. It is also recognised for its simple one-hand fold and head-turning style. It is one of iCandy’s bestselling models and is the choice for various A-list celebrities such as Victoria and David Beckham, Andy Murray and Sir Richard Branson. Two popular Peach colours have been chosen for the promotion, one of which is ‘Honeycomb’ on the new Space Grey chassis, exclusively available from UK independent stockists, backing up iCandy’s desire to continue to support their independent retailers. The second Peach colour is the stunning Primrose on a sleek Black chassis, available nationwide including the iCandy World website.

The iCandy MiPeach is the brand’s first toy product, and is symbolic with children, having been designed for playtime. Crafted by the pioneering British iCandy designers, the MiPeach is made with the finest materials and exacting quality of the full sized Peach pushchair. The MiPeach is available in two colours: a sleek Royal (blue) featuring white detailed piping and scrumptious Bubblegum (pink) featuring blue detailed piping. The MiPeach adds a touch of luxury to playtime, providing your little one with their very own iCandy pushchair. Every detailed element has been perfected in creating this beautiful miniature version of the iconic Peach pushchair, designed to make playtime as special as it can be.

iCandy are confident that both products will actively contribute towards the grand total to make a great difference. £10 from every Peach and £5 from every MiPeach sold will go towards the charity. Parents can now be rest assured that when buying one of these luxury products that their money will also be going to a truly worthwhile cause.

“Our partnership with Great Ormond Street Hospital Children’s Charity is something we take extremely seriously and are passionate about fundraising for. Alongside the considerable fundraising endeavours we have planned for the hospital over the coming years, we hope that by selecting two extremely popular products, we will achieve our ambitious target of raising the desired amount of money for the building of a brand new enclosed isolation recovery bay.” – Bradley Appel, Joint CEO of iCandy World

The Peach in colours Primrose and Honeycomb and the toy MiPeach pram will contribute to donations towards the Great Ormond Street Hospital children’s charity.